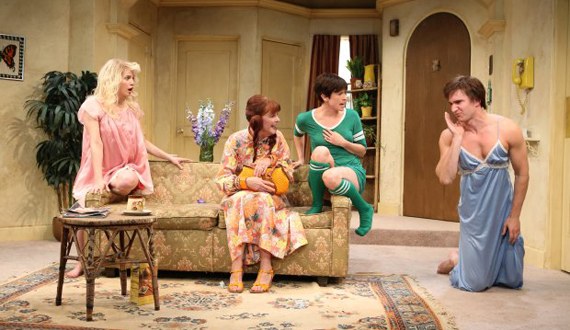 “Come and knock on my door…”

When David Adjmi Wrote his off-broadway play, “3-C”, he intended to create a parody, a social commentary on the sexism, homophobia and other prejudices exhibited in popular culture, particularly on the sitcoms of the 1970's.

The premise of 3-c features a man living with two female roommates, and feigning homosexuality as a ruse to avoid being thrown out by a prudish landlord.

DLT Entertainment, the owners of the rights to “Three's Company” thought so, and had their lawyers send a Cease and Desist letter to Adjmi, who, when confronted with the possibility of a legal battle, and armed with little cash to fund the fight, agreed not to extend the run (which ended in July), and to refuse future offers for productions, publication, or distribution of the play.

Theatre professionals rally behind the playwright

When the story broke, many in the theatre community cried “foul!”, arguing for artistic freedom, especially in the field of parody. And, while Adjmi may not be able to afford attorneys’ fees, there has been support from the theater community on his behalf. In an open letter defending Adjmi a number of theatrical luminaries defend Adjmi's work as bona-fide parody. The list of signatories includes: Martha Plimpton, Bruce Norris, and Stephen Sondheim, as well as representatives from the Lincoln Center Theatre and New York Theatre Workshop. The letter states that the signatories will be attempting to find pro bono legal counsel for Adjmi. The Dramatist’s Guild is also looking into supporting Adjmi with their legal aid fund.

What do you think?